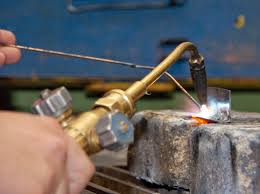 The gas flame is used to raise the temperature and produce heat with the help of gases. The metal is heated up to melting the metal and on cooling it solidify. Filler metal is used for fill the gap of welding and preparation the edges of joints. Many combinations of gases are used in gas welding but commonly used is Oxygen and acetylene.

In this process, the oxygen and acetlyene are taken for use from a high pressure cylinder.

In this system, oxygen is filled in a high-pressure cylinder and the acetylene is produced by the addition of calcium carbide and water.

When the gases began burning the flame is produced through the torch tip. The edge to be welded are heated upto melting. Filler metal is also added to complete the welding. This molten metal mixture when soldify on cooling forms a welding joint. 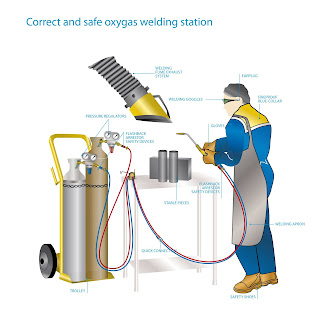 The cylinder filled with oxygen and acetylene. Both the cylinders are attached with pressure gauge, regulator and cylinder valves. The cylinder containing oxygen is painted black where the acetylene cylinder is painted Maroon. Hose pipe are provided with each cylinder. These pipes are connected to the welding torch.

To start welding the acetylene control valve is turned first when acetylene comes out of the nozzles it should be ignited with the spark lighter. It will give a yellow coloured smoke flame after it oxygen cylinder valve is opened and supplied is increased until the best suitable flame is obtained. Then the flame is foucussed on the edges to be welded flux and filler matel are also added with the help of heat of frame, the edges and filler metal metals and a joint is performed after cooling of the molten metals. The joint may be formed with or without using filler metals.

Same equipment may be used for cutting purpose . Oxy-acetylene welding is particular is used for sheet metal works.

When the volume of oxygen is more than the volume of the acetlyene mixer into the torch. This types of flame are used for cutting the metal and welding the brass metal.

When the volume of acetylene mixed in more than oxygen carburizing frame is formed. This flame is used to welding nickel, monel

It is known as balancing flame oxygen and acetylene gases are mixed in equal volume. This types of flame used for welding steel and cast iron.

The chemical which deoxidise the metal surface and provide an inert atmosphere around the molten metal is known as flux. The function of flux
Flux is available in liquid, powder, paste, and gas. Powder flux is sprinkling on the surface to be welded or the filler rod is dipped into the Powder liquid and paste flux are sprayed on the surface to be welded. Gas fluxes are used to form in the inert atmosphere around the joint to be welded.

The rod which provide additional metal in completing the welding is known as filler metal. The composition of filler metal should be same as metals to be welded

Sieve shaker of Molding Sand. Description Timer and switch are provided on the panel. The instrument consists of 10 sieves,…

What is the shatter Index Test and how to perform? It consists of an ejection mechanism to drop a rammed…